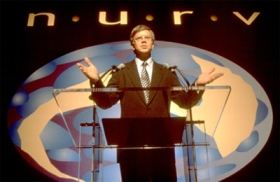 I will start first with the movies that inspired me at the beginning of my career as a programmer, it was Antitrust. Adapted from the story of Microsoft Antitrust case, the movie is based around a tycoon in software (NURV) with its CEO (who happened to look like Bill Gates 🙂 ) and a genius computer science graduate who was offered a job at NURV.

I enjoyed the movies because of its programmers’ appeal, credits written in coding style with <html> tags and // Comments, opening soundtrack was amazing, and cast well chosen. Despite the fact that in NURV (Microsoft) code was written in Java, but most details were taken care of.

The point I liked much was when the young boy was contacted by (Bill Gates) in person and offered his dream job that he didn’t even apply for. I liked the feeling of excelling in your field that jobs search for you not the opposite, the excitement of a young boy joining the company he never imagined he could join. The words that really inspired me for years later, was the welcome speech of the CEO when he said about software business:

This business is binary, you are a one or a zero, alive or dead. There is no second place.

You can watch this part here

I didn’t know about this British comic band of the 70’s before a few months ago; that was when I discovered how their Monty Python’s Flying Circus was a favorite for many programmers at that time. For a beginning, Python language was named after this show because programming with the language was supposed to be as much fun as the show was. One of the famous sketches of this show was the Spam sketch below.

In this sketch the word “spam” and “spam with eggs” was introduced frequently in a restaurant menu as an undesired ingredient and later all along the sketch, even the end credits. From this sketch came the word spam that describes unwanted mails. The words “spam” and “eggs” are also used in Python literature. I used to think that Python packages are named eggs because “pythons” are conceived in “eggs” but I think it has also to do with the show.

I don’t know if other movies or shows have inspired software or not but that was the ones I thought of.